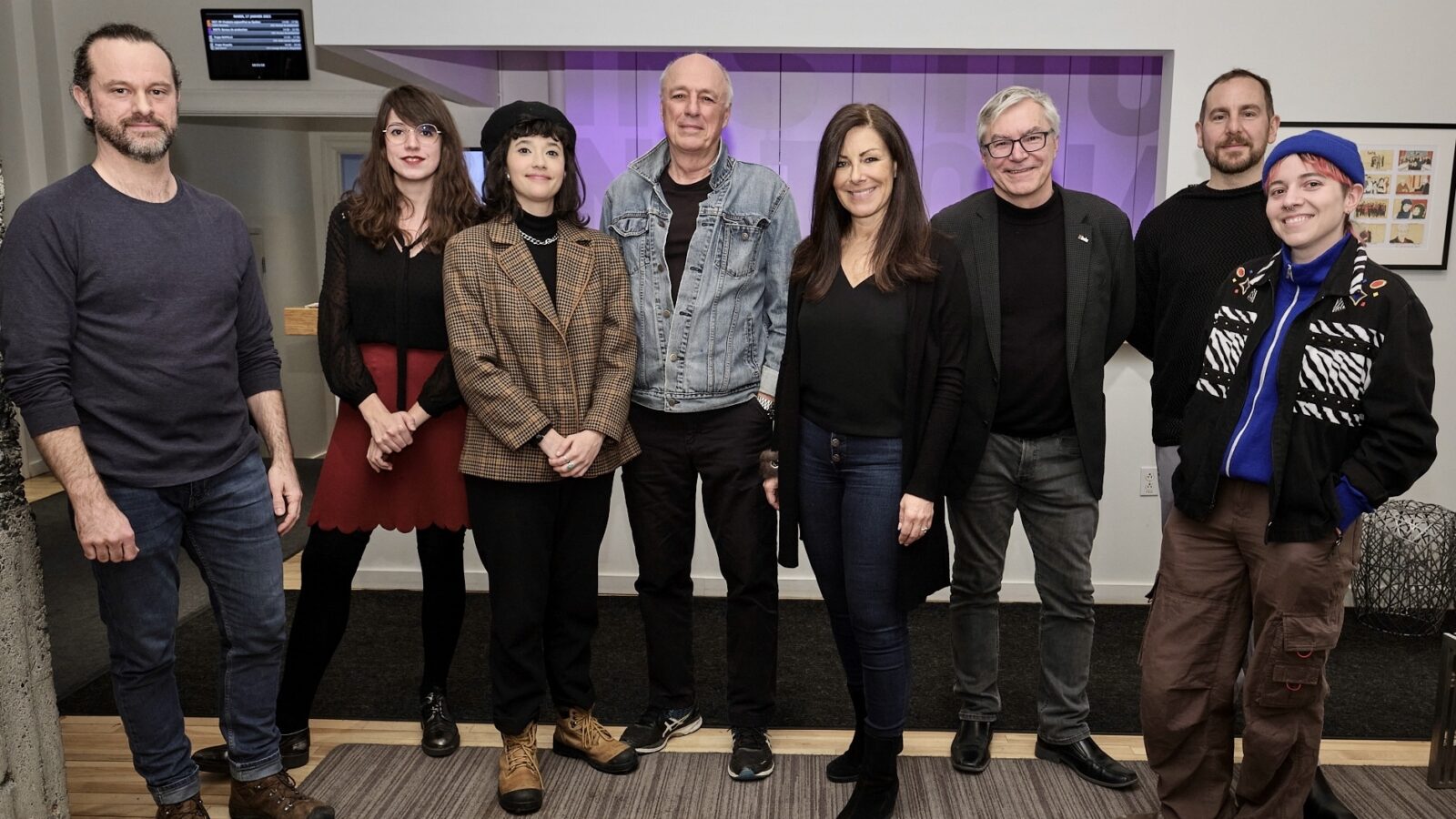 The five filmmakers, selected by a jury following a competition, benefit from the advice and supervision of one of the most acclaimed directors and screenwriters in Québec, Charles Binamé, in the realization of their films. The collection thus created is, in itself, a true work of art presented in five colourful and singular frescos sparked by the oeuvre of Riopelle.

This project was made possible thanks to the generous support of the Jean Paul Riopelle Foundation and the Audain Foundation.

Don’t miss the upcoming unveiling of our program to learn all about this event.

Dander by Héloïse Bargain
Dander is a human body material such as hair or nails. We cherish them when they are part of our bodies, while they are seen as repulsive once they shed from our bodies. The film resonates with the gentle brutality of Jean Paul Riopelle’s abstractions. On canvas, hair has replaced paint and the painter’s surge of freedom has turned into a violent desire for movement and change.

A graduate of the 2020 Documentary program (Production profile), Héloïse Bargain is a director based in Montreal. After years of journalism at Radio-Canada in Acadia and Manitoba, she moved to Russia for two years to produce long-format reports for the Moscow Times. Back in Montreal, she joined L’inis where she directed the films Jocelyne et Serge as well as La Bouilloire, which was awarded the prize for best experimental film at the 2022 Quebec Student Film Festival. She is currently in artistic residency at Les Films de l’Autre.

Of painting, my bones became dust by Laetitia Demessence
This film takes its inspiration from the white colour that is present throughout the oeuvre of Jean Paul Riopelle – the white of mourning, snow and geese; the white of the imprint of objects placed on a canvas before being spray painted as a stencil. This colour, sometimes used to contrast with the others, sometimes covering an entire canvas, seems to point to a void in which the man who suffers from osteoporosis is falling. Like a sigh of the creative gesture seeking to fill an absence.

A graduate of the 2021 – 2022 Writing program (Feature film profile), Laetitia Demessence is a Franco-Spanish director and screenwriter who grew up in Spain, Indonesia and Chile, before settling in Québec. She explores filmmaking through short films, music videos and dance films. Laetitia is currently working on the pre-production of her first fiction feature, Oraison, which she developed at L’inis and which is funded by Telefilm Canada’s Talents to Watch Program.

Lyrical Kaleidoscope by Jonathan Goyette
Lyrical Kaleidoscope is executed in the manner of Riopelle, settling down in front of a blank canvas with the dizziness of not being able to see the final result before it reveals itself, obeying only to the calls of vital impetus and intuition. While Riopelle sculpted paint, the film presents frescoes made from inks, chemicals and natural products applied to 16 and 35 mm film, with the underlying desire to transform experimental and abstract material into a narrative poem paying tribute to the oeuvre of the master.

A graduate of the 2019 – 2020 Writing program (Feature film profile) and member of the Kino movement, Jonathan Goyette has scripted, directed and self-produced several short films, some of which have been selected by festivals such as the Canada Shorts Film Festival, and Image+Nation. He is currently working on the script for his very first feature film as well as on short films. He is also interested in the hybridity between cinematographic genres as well as the effects of the obsession with performance on people and the environment. Also an author, Jonathan has published a collection of fictional short stories, Le saboteur d’avenir, with L’Interligne.

Riopelle was non-binary by Aimé Majeau Beauchamp
Through a fictional dialogue with Jean Paul Riopelle, this experimental film updates the painter’s heritage by seeking to build bridges with today’s generation. Between a tribute and a self-portrait, Riopelle was non-binary is above all an intimate reflection on the courage to be oneself.

From production to photography direction, research and production, Aimé Majeau Beauchamp has worked for more than five years creating audiovisual and radio content, including a series currently in production for Radio-Canada’s Ohdio platform. A graduate of the 2021 Documentary program (Production profile), they also produced the audio documentary series J’en perd mes mots with TFO in 2020. Having studied political science and feminism at UQAM, Aimé is particularly interested in marginality, identity and culture. RIOPELLE SHORT FILMS PROJECT 3

Movimentum by Anaïs Venegas-Grün
From the impulses of the body to the union of nature, painting and music become a trance of creation. An impetus that is as internal as it is external gives birth to an experience and a world of moving lights.

A graduate of the 2020 Mixed — Documentary and Fiction program (Production profile), Anaïs Venegas-Grün is a director, screenwriter and visual artist. She is passionate about queer cinema, on-screen representation and spirituality. She loves creating and transforming feelings into matter. The physical and the metaphysical always serve to discover life, and then intertwine in creation. All actions are for the love of humanity and cinema.